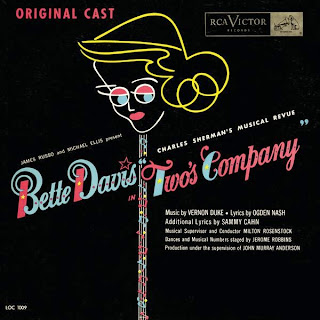 Who would have thought that Bette Davis, one of the best actresses in the cinema history, could be the star of a Broadway musical? It’s true, she sung and kind of danced in the 1943 movie THANK YOUR LUCKY STARS, where she had a good time with “They're Either Too Young or Too Old”. But an entire musical? It seems it was a little bit too much for her and it seems she collapsed onstage on opening night.

Nevertheless, this 1952 revue was recorded and although Davis didn’t have a great voice, the cast recording is an interesting one. In fact, one of the songs, the haunting "Roundabout", is one of my all time favorite Vernon Duke tunes, here sung by Ellen Hanley in an operatic mode; she has a better time with the jazzy “Haunted Hot Spot”. 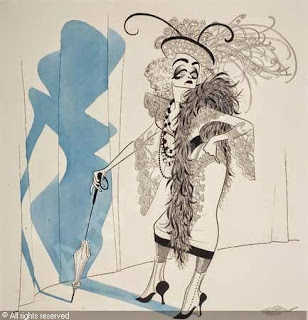 Davis’ first number, “Turn Me Loose on Broadway”, show that her singing skills aren’t a match for her acting talent, but I can imagine her devouring the stage with this number; in her number "Roll Along, Sadie”, Davis sounds like she was having a kind of overacting fun. I think she’s at her best with “Just Like a Man”.

“Theatre is a Lady” is a good opening number and there are a couple of beautiful romantic melodies,  “It Just Occurred to Me” and “Out of the Clear Blue Sky”. Personally, I don’t care much for the comedy numbers “Esther” and “Purple Rose”.

This isn’t a great score, but it’s a historic one that will look well on every musical fan’s music library.