MUSICALS IN CONCERTS ON DVD/BLU-RAY

For too many years stage musicals on video have been a rarity, with just a few titles available. Whit the arrival of DVD/Blu-ray I thought musicals might have a chance, but there are only a few titles to keep us smiling.

This is a list, as complete as possible, of all musicals in concert that were released on DVD/Blu-ray, plus related videos. For a list of STAGE MUSICALS ON DVD/BLU-RAY click here. 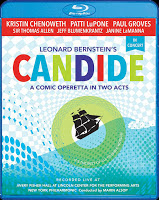 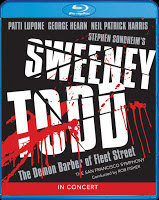 THE BOYS: THE SHERMAN BROTHER’S STORY - Documentary about the prolific and award-winning collaboration of songwriting brothers Robert Sherman and Richard Sherman. “It uses original interviews, archival footage and personal photographs to create a full portrait of the songwriters' lives.” Includes bonus features.

BROADWAY LOST TREASURES II - A new collection of rare musical performances taken from the Tony Awards broadcasts. Starring, among others, Angela Lansbury, Chita Rivera, Michael Jeter, Patti Lupone, Robert Morse and Jerry Orbach. Numbers from, among others, SWEET CHARITY, CHICAGO, GRAND HOTEL, MAME, GUYS AND DOLLS and ANYTHING GOES. The DVD includes bonus material from ME AND MY GIRL, NINE, COCO and FIORELLO.

BROADWAY LOST TREASURES III - A new collection of rare musical performances taken from the Tony Awards broadcasts. Starring, among others, Julie Andrews, Robert Goulet, Angela Lansbury, Jerry Orbach, Ethel Merman, Chita Rivera and Kristin Chenoweth. Numbers from, among others, FOSSE, INTO THE WOODS, KISS ME KATE, KISS OF THE SPIDER WOMAN, RAGTIME, WEST SIDE STORY and CRAZY FOR YOU. 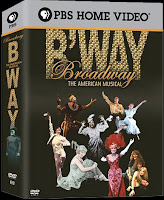 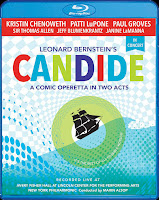 CHITTY CHITTY BANG BANG: THE MAKING OF - A behind the scenes look at the creation of the stage production of the Richard M. & Robert B. Sherman musical. Besides interviews with, among others, Michael Ball, Emma Williams, Gillian Lynn and Nichola MacAuliff, it includes five full production numbers ("Hushabye Mountain", "Me Ol Bamboo", "Bombie Samba", "Doll on a Music Box/Truly Scrumptious", and the "Finale").

FIRST YOU DREAM: THE MUSIC OF KANDER & EBB - DVD release of the 2015 televised tribute to John Kander and Fred Ebb. Featuring Kate Baldwin, Heidi Blickenstaff, James Clow, Norm Lewis, Julia Murney and Matthew Scott. Directed for stage by Eric Schaeffer and produced by HMS Media. Music direction and vocal arrangements by David Loud. Bonus items: "She's A Woman/Dressing Them Up" (Kiss of the Spider Woman), "Blue Crystal/Marry Me" (The Rink), "I Don't Care Much" (Cabaret), "Love and Love Alone" (The Visit) and "The Money Tree/Maybe This Time" (Cabaret/The Act).

GUYS AND DOLLS - OFF THE RECORD - 1992 documentary about the making of the revival cast recording. Complete takes of some songs plus behind the scenes footage in the studio with cast, director Jerry Zaks and musical director Edward Strauss. Commentary by Peter Gallagher, Josie de Guzman, Nathan Lane, and Faith Prince.

HAIR: LET THE SUNSHINE IN - Documentary about the musical. Archival footage from U.S. and international productions; interviews with authors James Rado and Gerome Ragni, composer Galt MacDermot and Broadway director Tom O'Horgan and Milos Forman; footage of James Rado rehearsing HAIR with various companies; interviews with original cast members Keith Carradine, Ben Vereen and Melba Moore; television appearances by Rado and Ragni, both of whom starred in the original Broadway company. 55-minute documentary with an hour of additional footage.

HEART & SOUL THE LIFE AND MUSIC OF FRANK LOESSER - PBS’ documentary profile on composer/lyricist Frank Loesser (GUYS AND DOLLS, THE MOST HAPPY FELLA, HOW TO SUCCEED IN BUSINESS WITHOUT REALLY TRYING, among others). Includes clips from some of his shows and movies, plus interviews with Matthew Broderick, Robert Morse, Charles Nelson Reilly, Stephen Schwartz, Jo Sullivan Loesser, Emily Loesser, Margaret Whiting, Jerry Herman and Betty Garrett. 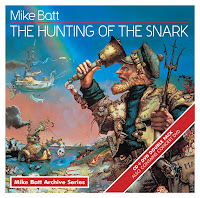 LIFE AFTER TOMORROW – This film by Julie Stevens and Gil Cates, Jr., reunites more than 40 women who played orphans in the original Broadway production of Annie and reveals the highs and lows of their experiences as child actresses in a cultural phenomenon. Once the curtain came down, many found it could be a hard-knock-life, fraught with out-of-control stage mothers, separation anxiety, and worst of all, pubescent growth spurts that could find the moppets being replaced by smaller, younger editions just waiting in the wings. Features behind-the-curtain footage from the original Broadway production and performances with the re-united orphans. Featuring Allison Smith, Dara Brown, Julie Stevens, Charles Strouse and Sarah Jessica Parker.

MARVIN HAMLISCH - WHAT HE DID FOR LOVE - DVD release of the PBS special created with cooperation from Hamlisch’s family and access to his personal archives. Bonus include, among others: What He Did For Love; At The Ballet; Genius At Work; The Musician's Musician; The People's Composer; Christopher Walken on Dance; Marvin's Mentor-Jule Styne; The Glass Menagerie - Musical; Peter Dugan & Charles Yang - I Can Not Hear The City; Marvin Hamlisch & Ed Kleban: A Beautiful Collaboration. 84 minutes.

MISS SAIGON, THE MAKING OF - Like the title says, this is a documentary about the making of the stage hit MISS SAIGON. "Witness the evolution of this monumental production from its inception in the sumptuous hills of Provence to its glamorous London debut on a fascinating insider's voyage into the world of the theater."

SALAAM BOMBAY DREAMS - The "making of" of the London production of BOMBAY DREAMS. From rehearsal to opening night, with an exclusive interview with Andrew Lloyd Webber and numbers from the musical.

A TALE OF TWO CITIES - Concert staging of the Broadway musical, filmed at Theater Royal, Brighton, England in June 2009. Starring Michael York as the Narrator and original Broadway stars James Barbour, Natalie Toro, Brandi Burkhardt, among others. The concert (directed by Jack Cummings III) is a hybrid performance, complete with costumes, projections and other design elements. Music and Lyrics by Jill Santoriello.

WORDS AND MUSIC BY JERRY HERMAN - Jerry Herman documentary that “chronicles Herman's rapid rise from witty, topical off-Broadway revues during the 1950s, to his first Broadway hits in the 1960s, through the less successful shows from the 1970s, to his triumphant return in 1983 with "La Cage aux Folles”. Bonus features: the complete "Hello Dolly!" number performed by Carol Channing and the original cast of "Hello, Dolly!"; "Put On Your Dancing Shoes" from Jerry Herman's 1955 college musical; and "Before the Parade Passes By" with Jerry Herman and Ethel Merman.
Posted by Jorge Tomé Santos at 6:22 PM